How do Afford Your Rock and Roll Life Style? 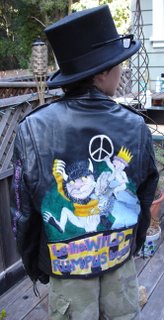 The craft I feature today is an old craft to be handed down to my son someday. My hand painted leather Jacket from days of yore ( and just barely according to Michelle and Blaise) worn to Gulf War I protests and many, many concerts/shows. Painting peoples leather jackets was one of my first "craft for money" ventures. I have saved my jacket for Jake because I want to share with him how great it can be to participate in happy subculture and inhabit a time and a place as completely as you are able.

I was tooo sleepy to post on Friday because on Thursday night we went to go see Jacob's first concert. We got tickets for our birthdays to see the Decemberists from my lovely younger sister and her husband. The show was at the Warfield Theatre in San Francisco, so we drove up right after school. We parked and took the BART over. We wanted to have dinner but by the time we had reached the other side of the bay it was getting late. We went and scarffed up big greasy slices of pizza on Powell Street, just like I used to do before shows when I lived in San Francisco. Sitting outside and watching the parade of tourists, hipsters and homeless drift by.

We went to the theatre and checked out the outfits of the crowd in the lobby. I worked at the Warfield sometimes when I lived in San Francisco and my hubby did too. It was a great way to see most of a show, for free. I worked for shows I was curious about but not my favorites.. For Instance.. Alice Cooper was a usherable show. For Nirvana, I ponied up and was out in the mix crushed against the stage, slowly going deaf and screaming. Joy.

Jacob, all freshly 11, is a bit short for the floor, (not that the Decemberists had a mosh pit or anything) so we had some lovely seats in the front of the balcony. He dressed for the occasion in a T shirt, tie, army jacket, bowler hat, and black and white wing tips. Jake usually hits the hay at 8:30 pm and the opening band didn't start until 8:00. I was worried that he would poop out on us. He watched intently even though we did not know the opening band. Lavender Diamond.. a quirky band with a whimsical lady singer. He was curiously watching while they set up for the next act. The Decemberists play a rather astounding selection of instruments in their show. After a bit he did ask " why is it taking so long? when will the Decemberists come on?" Oh, do I ever remember thinking the same!
The lights dimmed, the crowd went wild and The Decemberists took the stage. They are a very unusual band. " British Folk Inspired Library Pop".. singing often of historical or fabled murders and ghosts, tragedies of all makes and models with upbeat irony and musical influence that is at once recognizable and still defies classification. Jacob sat up and found all the faces from their only self produced video. His eyes sparkling as we clapped and cheered. He sang along and followed the bands commands of audience participation .. including a vocal warmup so we wouldn't strain our voices. His dad snuck out and got him a concert t-shirt with the art work of Carson Ellis.. (someone who has influenced my craft in many subtle little ways..Her site is down.. so sad.)
We showed him how to tell if there will be an encore and he still glittered at 11:30 when the house lights came up.
Tired, quiet and different he rode home on the train. His concert 't' worn two day in a row since the show. Will he end up like me with a door trimmed with ticket stubs? I love to watch him relate to music.. He loves so many atrists from the Gorillaz to Beck to the Thermals and the Clash. Stacie knows.. We influence what our kids listen to and they make it their own. People who love music have a sound track to their lives.. People who make music are a gift to all of us.
Posted by You can call me Betty, or Bethany, or Beth ...Just don't call me late for dinner. at 2:46 PM

Oh man. That makes me really miss concerts. And the first time a kid sees a concert of someone they like, awesome.

And what is it anyway with the big intermission between bands? I know they have to switch out the drums, but seriously... that shouldn't take half an hour.

lucky you - i love the decemberists (maybe it's the librarian in me...)
love the jacket too. of course.

How incredible to be able to take Jake to his first concert! And the Decemberists, no less. You did take a dictionary, didn't you? Boy, I've learned a lot of words since we started listening to them, like picaresque and infanta. :)

I think it's super cool that you are saving your jacket for him, too. I bet, before long, he'll ask you to paint one for him as well.

And I know just the pizza place on Powell - across from Urban Outfitters, right? I loved the balcony in the Warfield. I actually snuck up there during Ministry when everyone else had snuck downstairs. :)

I feel the same way you do about music. I'm so thankful for *all* of the talented people that produce my life's sound track.

I LOVE the Wild Things jacket!!!!! What a great heirloom! And your son is SO CUTE all dressed up!!!!

I passed my leather jacket down to my eldest a few years ago, and it was lost/stolen within the the year. It was heartbreaking for me, but my teenager is a Lord Of Chaos, so i suppose i should have seen it coming....he'd surely lose his head if it weren't attached.

I have not heard the Decemberists yet...i shall have to give them a listen forthwith! They sound right up my alley.....

what a great story! you took me back to the times my bands played in the bars and clubs of SF!! thanks for the link, I love yer blog and promise to de-lurk!!

Isn't the pizza place called Blondie's? The place where you get a giant slice of pizza?

I've been to a few concerts at the Warfield...the best one was the Pogues. This was after Shane McGowan was no longer touring with them. I was worried they wouldn't be as good but they were fantastic.

What a great night!

Hey there again...Etsy won't let me register so I can e-mail you a question about your necklaces and boxes. Could you send me your e-mail through mine?

Just taking a moment this morning to catch up on your blogging after an intense writing retreat up here. You are so cool and complex and wonderful...even after taking into account the maternal pride factor!!!

Just checking your blog after an intense writing retreat up here. You are so cool and complex and wonderful...even after taking into account the maternal pride factor. I admire you!!!

what a wonderful entry! (i just wandered over here from your comment on my livejournal.)
what a lucky kid to have such a fantastic band as his first concert!
i think i felt the same way when we saw them on the fourth...and it was my zillionth show! ;)
take care! happy concerting!
~sarah

Sildenafil citrate, sold under the name Viagra is the first of a new group of medication which allows adequate sexual stimulation, relaxes the blood vessels of the penis and helps erection[url=http://www.blogs.medextreme.com]buy cheap VIAGRA online[/url]