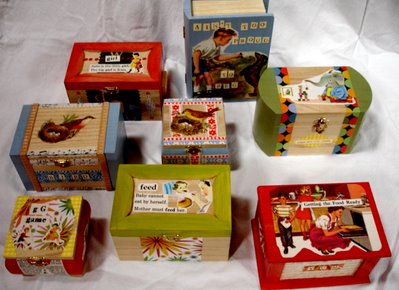 Well, I am doing my very first "house party". I have never been to one nor participated in one before.
I do not know exactly what to expect...

I have done 2 craft shows..
I was a vendor at Dicken's Universe Literary conference at UCSC..
and I have done a couple of impromptu trunk shows for close buddies.
I have sold a whopping one item on Etsy.

This one I am doing because I was flattered.
I made a t-shirt for my lovely sister and one of her clients commented on it.
The client has a party featuring her friends who are crafters and through my sis, she asked If I'd like to be involved.
Pretty flattering. All she asks is 15% in trade for what I sell that day.

Good for me and good for her too.. There are several of us and if we do well, she will have a big bunch of presents for covering shopping responsibilities for the Holidays. She is expecting 70 people. That is quite a crowd.

I like this idea. When I was a very small kid we had no money. My mom was a single parent for a couple years and she made us dolls and bought us a book apiece for Christmas. All other presents came from the grandparents. Her family got home baked goodies. When she married my thoroughly fantastic step-father when I was 8, financially things were not so tight. She still wanted to do handmade Christmas.. which was fine by us. My mom makes excellent stuff.

After a while she became more political.

She became involved in a group called Beyond War. They were committed to starting a community dialog about the dangers of the nuclear arsenal. One of the statistics that she learned during that time was that the United States economy was based on two main components: The War Machine... and Christmas.

Mom said.." Well there is only one part of that I want to participate in."
I think that year my sister and I got a stereo from Santa...amongst a pile of goodies that dwarfed the tree.

I drove one boy friend crazy when I insisted that I would only shop for the holidays at small independent retailers because I knew half a year's money is often earned in 2 months for them. (He was dying to go to Macy's.) My mom really made the point that dollars are votes for what you believe in.. And she was Pro Santa and Anti bomb. I still am a huge "mainstreet not the mall" fan even despite working as a mall doll for the last 6 years. I love a cute boutique (Picture today: boxes going to Angelina's cute boutique..), and independent bookstore, a craft fair and this year I will have a handmade Christmas myself... and help the economy.. by shopping in all those places and on Etsy. And hopefully selling some stuff to other people of like mind. I love the idea of some one getting something I made as a gift.

Now.. what do you believe in?
Will you put you money where your heart is?
Posted by You can call me Betty, or Bethany, or Beth ...Just don't call me late for dinner. at 6:24 PM

Boutiques over Malls anyday!!! You go girl! My Mother in Law, used to give me 'house-parties' whenever we visited her, before she died... It was a marvelous way to meet people and sell stuff at the same time! Hope you sell out!

Hell yeah! I actually really like Macy's but if I can get what I'm looking for from a small boutique or independent store I always do.

It is always my ambition to put my money where my conscience is.

Good luck with the craft party! Your boxes are so beautiful and interesting I don't see how anyone can resist.

tryin every day!! I am fortunate to work for our local smalltown paper. I was assigned to write some stories for a holiday gift guide, so I interviewed several local crafters. It comes out the 28th, and I hope the ladies get some customers! Yay for handmade!!

I would be nervous about a house party. Yours sounds nice. The more people the better. :) I can't wait to hear how it went.

I also believe that dollars are votes for what you believe in. Not just dollars, but hours and attention, too. If no one watched crap TV, it would disappear. If no one bought poorly made clothes, they would disapper.

I can be as guilty as anyone else, but I try really hard to focus on the positive things in life. To feed them with my money, my time, and my attention.

That's a huge part of the reason that I'm here, commenting on your blog. :)

wow! i´ve never been to a house party like this either. but what a great idea! good luck, i´m sure you will wow everyone with your goods. :)
besitos, risa
http://muertoderisa.typepad.com

Definitely down with the handmade. I spend hours pouring over Etsy, imagining what i would spend my millions on if i ever win the lotto! LOL! Your shop would be one of my first stops, lady! Your jewelry is to die for.
I wish more members of my family appreciated handmade things. For the most part, only a small handful of my closest pals enjoy those types of gifts. It' sad how materialistic most of them are. But i DO handmake for everyone who likes gifts with heart and soul, and NOTHING makes me happier than buying/bartering from other crafters.
I think your craft party sounds brilliant, and i have no doubt you will do fabulously! Everything you make has that "spark"...you know, that glow that is all over any item that is made from that special chamber of one's heart :)

malls? urgh. it's to the point that i can't stand a mall. even those new out-door ones. you know what? it's Still A Mall.

i have high hopes of making lots of stuff this year too. and i especially like to do stuff that is useful and heartfelt. not something that's just going to clutter up a home.

I am the same way. I love shopping at the small locally owned stores. I hope to do a lot of my shopping on Etsy as well to support other crafters. It just doesn't seem very fun to go to the mall like a robot and buy stuff the stores think we need to buy. I hope the house party goes well.

I think that we all need to make at least a couple of things for someone who would like it. And then buy something from some independent stores and fill in the gaps with items from Etsy. Let's all stop shopping at the mall and Wally-world! We can start a revolution- it will be fun. :)

I did two craft shows this year and the one at a friend's house I made more money and enjoyed myself SO much more! Can't wait to hear and see more of yours!

I love your sentiments about boutiques and Etsy over malls. I completely agree. Even if you have to spend a bit more you know you're helping out a person or family.