Hang on to your hats, Ladies and Gents... You are about to see why I am the unchallenged captain and mascot of the US Olympic Rationalization team.

Well, I had to get a new used car.
My old Honda Accord had lasted as long as it could. 225,000 miles was the tipping point where we had to decide if we loved it enough to pour money into it, or whether it needed to be donated to charity. We opted out.

I feel a little guilty. I know that the greener idea would have been to spend a few thousand to repair it and just keep driving it until pieces were literally falling off. When we took a close look it seemed environmentally responsible but fiscally irresponsible to keep repairing it.

I can lean that way: Planet>pocketbook. I pay more for organic, or handmade, or local small batch products... Eagerly.
But this time I made a different choice. I threw in the towel on that car because I really hate being broken down and that was what the next few years would likely entail. Me, stranded here and there. Irritable, late and likely as not with a dead cell phone and a smelly dog or cranky teenager. I am not that good of a person.
Being a libra, and always seeking a balance in all things, I decided to make adjustments to green up my choice. I picked a more efficient car. It isn't a hybrid... But it rates above average on MPG and emissions. I bought used and will keep it for many years...Until My electric plug in is ready and my solar panels installed

So, what else could I do?
The same inclination to do good by the environment had me planting veggies last spring and now my tomatoes are producing in spades. Too few to can and too many to eat fresh. I wanted to sun-dry them but wasn't too sure about my local humidity and how fast I could dry them without bacteria taking over. We are in the redwood forest and half a block from a rather large river. Hauling the tomatoes around on an old window screen for 4-10 days, praying for them to not mold? Hmmm... There are a couple of oven options... 8 hours of slow roasting (hot out already, thanks), or microwaving for 1/2 hour. Nuked tomatoes anyone? 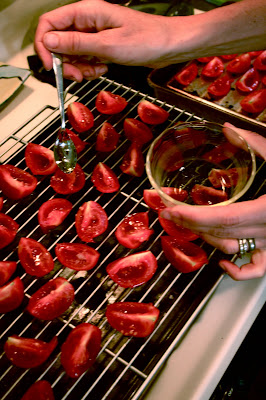 1)Tomatoes are quartered, seeded, and drizzled with olive oil,
placed on a rack over a metal baking tray. 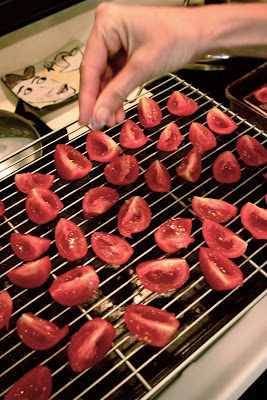 2) Season to taste with sea salt and herbs.
Or a recipe I found here that calls for Putting Them In Your Car. Using my car as a passive solar food dehydrator? That is just the kind of thing that would help me rationalize my luxurious new/used auto as being just a teeny bit greener. And of course it also indulges my infatuation with the sublimely ridiculous masquerading as the practical. Good thing I like the smell of tomatoes! 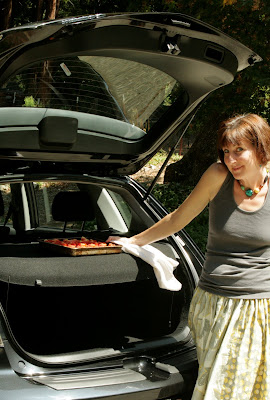 3)Put in hot sunny car window for 1-2 days. Remove at night.
Finished tomatoes should be similar in consistency to raisins (dry and leathery-chewy)
and stored in a plastic bag in the fridge.

Using My Powers For Good Whenever I Can,
Betty
Posted by You can call me Betty, or Bethany, or Beth ...Just don't call me late for dinner. at 12:47 PM

That's awesome! Hope we can see some pictures when they're finished! :)

Really? Wow. That is so funny. Let us know how they turn out.

too funny. My husband built a solar food dehydrator last year and we've been using it pretty successfully. pics and stories: http://www.tinygogo.blogspot.com/

YOU> Are my new hero! Big smiles on my face here over this post. Sister, how are you at braising meat on your engine block! HA! You'd probably produce a four star meal by the time you got where you were going knowing you.

hahah I would forget they were back there!!!

genuine LOL. wish we got enough sun in the UK to do this! hehe.

Betty, you are a kick! This kind of post is what keeps me coming back to your blog...Thanks for reading my blog, too!

That is AWESOME! I love it!

oooohhhhh....what a nice mazda 3. My car nerdy husband knew what it was right away. I have a 5 and I love it. I never thought of drying fruit that way-- such an awesome idea! I love your skirt too-- amy butler.

You rock! I would totally choose new-ish car over high chance of being stranded. There's only so far green can go and if green isn't picking you up roadside and towing your car, well then... Besides, your new purchase playing double duty as a tomato dehydrator justifies everything.

Making soap in your car rocks socks too :) I love doing it.

I love this and I am so doing this as soon as the sun comes back out. Normally I reserve my trunk for drying bay leaves, but the thought of bay mingled with tomato, mmmmmmm.
xo, suzy