Perhaps you might recall this lovely yet un-assuming little out fit that I posted way back in July.
It's actually something that has been a work in progress for almost 2 years now.
It is the Jane Austen Theater Dress. 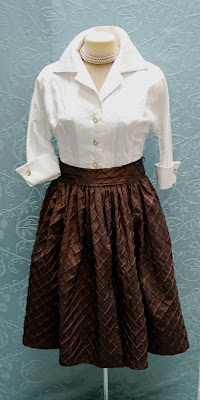 Recently titled "No Apologies to Mr. Darcy" for the FashionArt show. 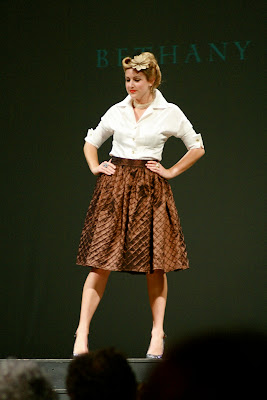 The taffeta on the skirt is hiding 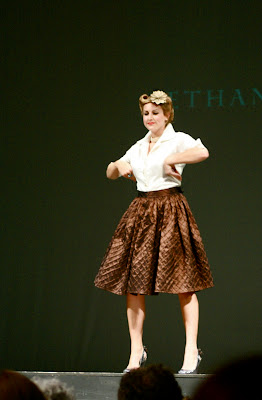 A series of loops and cords 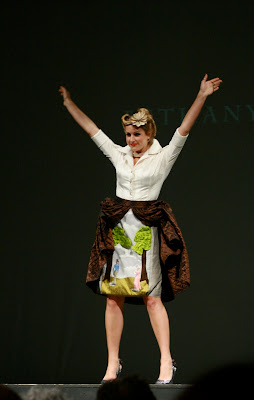 So that when the model raises her arms .... Up comes the curtain. 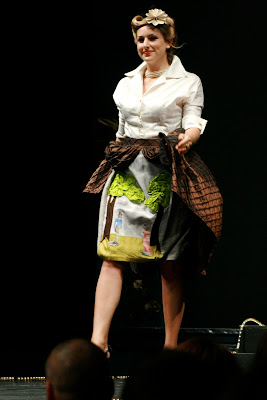 The underskirt is appliqued with a scene where Elizabeth becomes inappropriately damp in the presence of the rather stuffy Mr. Darcy...
( Happens to lots of Jane Austen characters, actually.) 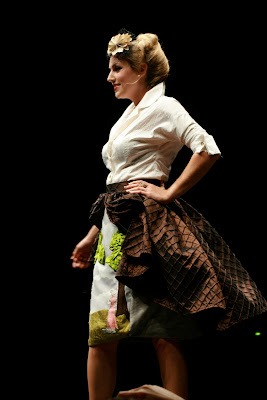 We had a collar of vintage pearls and a fascinator made from birdcage net and the folded pages of the novel. 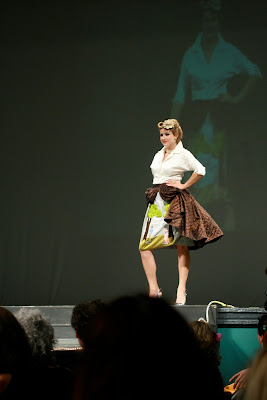 As many of you may know I have a rather morbid fascination with the societal restrictions placed on the mid-century female. So, I had some fun combining a slightly risque reveal on a vintage fashion piece with a scene from Jane Austen, which I love, but also makes me marvel at the ways women were marginalized and how their very well being was linked inextricably to their marrying or being cared for by a man.
I was so lucky to get to work with Chelsea Keating as my model. She  really put everything into it and it was quite frankly totally amazing to see my creation come to life as she took it down the runway.
She was fun, and sweet and so perfect for it.
It wouldn't have been nearly as exciting without her enthusiasm and charisma!
Thank You, Chelsea! 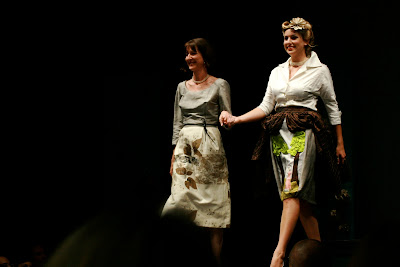 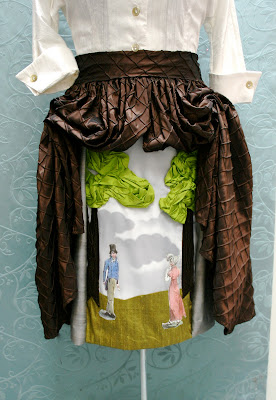 And here is a little close up... for the crafty voyeurs.
( click the photo to enlarge...)
This is actually a w.i.p. photo.
There were silver and crystal rain drops added on the day before the show....
What can I say? Deadlines are my greatest inspiration!
Posted by You can call me Betty, or Bethany, or Beth ...Just don't call me late for dinner. at 8:18 AM

Email ThisBlogThis!Share to TwitterShare to FacebookShare to Pinterest
Labels: art that is craft, fashion, studio

Oh, Bethany - what a completely stupendous, fabulous, fantastic, unique, show-stopping and delightful creation!!!
Waiting for the "unveiling" was SO worth it.
I absolutely love it.
100 curtain calls for you!

You marvelous, mad, mad, genius! Only you, Bethany!

It looks from the photo0s as if Chelsea really rocked it for the show!

What a brilliant concept! congrats!

In the presence of greatness... I should have realized!
I am speechlessly impressed.

what a unique and brilliant costume! it looks wonderful!!

That is absolutely stunning! Congratulation on a work of art :-)

Beautiful! The Jane Austin scene adds some great whimsy, too.

Wow! Reminds me of my art school days...
You are one creative gal!

Utterly, utterly fantastic. What I love most about this is that you are showing us your work magnificently on display. It's not in your workroom, or even in your yard; it is out in the world where it belongs, being seen and celebrated. Huzzah to that!

Concept Fashion! I love it!!

this is so cool!

omigawd ...omigawd .....omigawd!!!!
Fabulosity!!!
I totally started a similar project for my 7 y o daughter about an ENTIRE year ago!!! I was inspired by Dolce and Gabanas "Latraviata skirt".
My sewing is no where near your amazing abilities and I could never get it right. Maybe I will try again.
by the by your dress is much more clever than D& G's!!!

Haha. Oh my god, that is great. And it just put a big smile on my face!