Thrift Thursday: Madamoiselle Secretary and a Side of Sugar

First things first. Jacob IS "Rolf" in "The Sound of Music". The part he was afraid to get. They do multiple casts so he also "stage crew" and "party-goer"... But for half of the performances he is the teenage (ironic) Nazi heartthrob, with a romantic duet, and dance number, and all. As a former stage brat... I seriously, couldn't be more thrilled. This is a huge step out on a limb for him. He was pretty well talked into joining the company by myself and his pal Alex in the first place. He had no personal aspirations toward the stage whatsoever. And just in case you were wondering, despite being mildly coerced, he was practicing his song and lines as we climbed down from the top of Yosemite Falls (anything to distract us from the agony of the feet, and legs) and I think, if he can get the dance down... He's going to nail it.

Now back to our regularly scheduled blog:

Okay, I was almost done thrifting when... 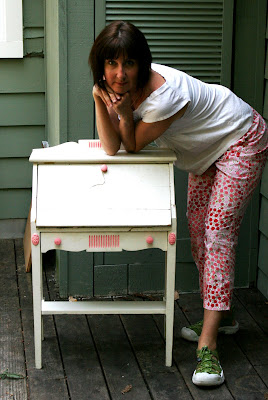 I couldn't resist posing with it since it matches my pants

I found this. Which I don't personally need, as I am already too big for it. But there it was. And I wanted to paint it and fix it and line the inside with Addison Endpapers papers. And wax it with beeswax. And find tiny pens and pencils and stationary for it. I already own a perfect "to scale" glass lamp for the top. I simply couldn't and didn't resist.


And just in case you hoped to see something Cuter: 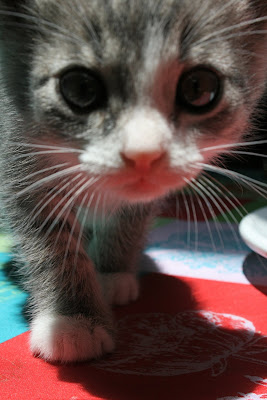 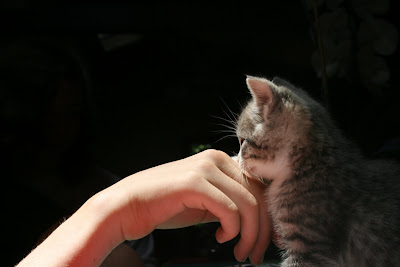 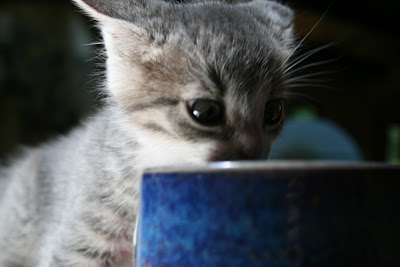 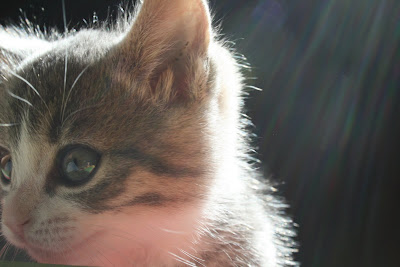 My son's buddy Michael brought his new kitten over to meet me. Michael may be my new favorite of my son's friends. How cool was that, to bring me this baby to cuddle? Seriously, what a treat! And it let me practice my photography on a fun subject.
Posted by You can call me Betty, or Bethany, or Beth ...Just don't call me late for dinner. at 12:26 PM

Hey we just met that kitty too! On our way out from dropping off Jake this afternoon. Soooo cute.
Can't wait to see how the desk turns out.

Congratulations to Jacob. I'm sure he'll do a great job.

I can't stop oooow-ing and aawwwww-ing before the pics of the divine kitten and your great thrift find.

ohhh... I have the best little pencil box that needs to come your way to go in your little desk... honestly it would be a great little bed side table!

Your post is cuteness personafied!
I think the kitten wins the cuteness cup though that desk rates up there too. I am glad that we can rely on your blog for gratutious kitten shots as well as great vintage cloths/crafts/thrifting finds.
Congratulations to Jacob. The Sound of Music is the big favourite in the Thoroughly Modern household and I am sure he may surprise himself by really enjoying performing in front of an audience. Looking forward to detailed after shots of the desk.

Awwwwwwww! Little kitty faces are so darling!
I'm so happy your baby boy gets to stretch himself with the role. I bet he nails it. He's certainly handsome enough for it =0)

Ah, I stopped by for the Sound of Music casting update, and here it is. Very, very proud of Jacob; just wish he could appreciate the mileage he will get out of this for the rest of his life (we know it -- he'll be singing those songs for-evah, telling the story of how he didn't want to be Rolf and then BAM he was Rolf).

Ooooooh!!! it's sooooo cute kitty. I love it. You are doing great job.