The pure and simple truth is rarely pure and never simple. 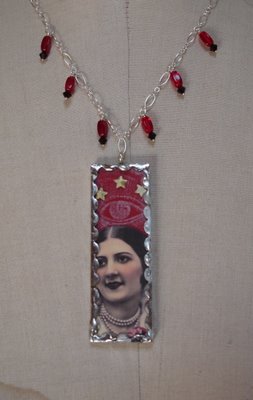 (A necklace from my Etsy Shop.. bold and blushing more than I am..)

And now to reveal the real truth:

1 is true.. I lived for awhile at Harbin Hot Springs , in Lake County.. if anyone is up for some sprouts, tahini, hot springs and naked people.
It was highly influenced by a boyfriend, who was left there. It was highly educational, as I discoved .. I am only a bit hippy-ish.. not hardcore hippy. ( Organic ok, not vegan.. Clothing, prefered.. Patchouli, only in very small doses. Very. Small. Doses.) So, there was definitely some Nakidity.. for ya, Stacie.


2 is a lie.. There really was a Buck Naked (et al) but unfortunately I only went to his fantastic shows, dancing to the beat of his dangling plunger.. He really did lose his life in the senseless act of violence described. I only wish I would have had the chutzpah to try and write something for that band. They were damn fine muscians. (I also got the song title wrong..the real one was a tad more risque..) They were "pornobilly" after all.
I was very into the anti-PMRC censorship movement.. and apparently "really raunchy" was a major theme for me in my early 20's.. ( Don't worry, Mom.. Just as entertainment.. not professionally.)

3 is true. And it lead to my first paying gigs as a crafter/artist. I painted several jackets including my own (more on that soon). It was funny to get "busted " at my rehearsal dinner and I learned to never keep anything from my mom.. Because my dear friends..

The truth will always out!

My WIP will not be shown, as I am trying desperately to make a production completion schedule for myself and I have been crafting hard to see if I can hit my goal. ( Therefore, taking pics has been low priority.)
So far, I am not quite making the goal of 10 completed projects a week.. and I need to find a show to be in or something..
Otherwise I will have a zillion finished crafts and that is lovely, but won't keep me out of the traditional workforce for long!
Posted by You can call me Betty, or Bethany, or Beth ...Just don't call me late for dinner. at 8:18 AM

That was fun my dear!

i love those kinds of things.... the fun truths are always more exciting to divulge than, say, things like - i don't shower every single day... thanks!

Yay! I got it! I think my blog research helped, because I did note the difference between the song name you posted and the original...more...."kitty-fied" name.

Ten completed projects a week? What are you, superwoman? :-)

Love the title of your post, it is so very true.

Yes, that was fun! And the 10 project thing, please tell how you do it. I'm doing good to do ONE :0) Love the necklace!

That was smart to put a kernel of truth in one of the lies ... that made it harder. But I still guessed it. Yay! I love the new look, too. Your blog is rockin'

That is such a cool necklace!