Made it Myself Monday: Go Vote !! Pillow. 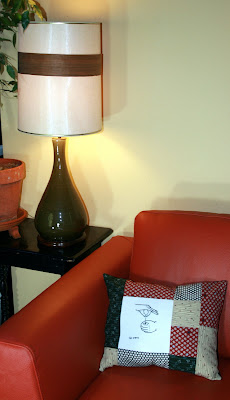 This is my new crafting for the home from the last several days: I thrifted the lamp. The deal included a small dent in an otherwise swanky shade. I used a thin strip of wood veneer around the dented spot, and good as new. The golden color is great for counteracting the weird glow from the new florescent light bulbs that I finally gave in and installed. I paid a whooping 12.00 for the lamp and shade but I think it really looks great there and without the floor lamp that was there it looks a lot less cluttered. I have an idea of someone who could use a cute cottagey floor lamp in their window display, so I think it will go to a good home.

I also made the patchwork pillow. I used some of the fabrics I got from Whiplash last year and they are so fun to work with. 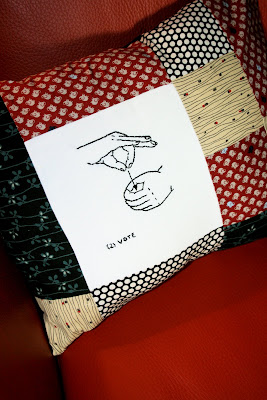 I made an American sign language embroidery awhile back. I really liked the way the sign looks. The idea of putting in your vote. Contributing your vote. And we are pretty politically vocal around the home, so I felt it was also "a family value" that I could see as a modern day sampler for our house.
Samplers are such an old fashioned notion, but the whole hand stitched motto idea has such an interesting, meditative ambiance about it. (The sign language diagrams are just something I have been fascinated with since 2nd grade when we had a teacher who taught us all to sing and sign at the same time, and I like the way they make words graphic.)

I have been doing a lot of reading lately, especially books and magazine articles from the first half of the the last century. I guess I am trying to access my inner housewife.. Anyway, I came across this excerpt from an article that was originally published in the Ladies Home Journal March of 1919:

"Many have thought that the longer woman suffrage could be postponed the better prepared women would be to exercise the privilege and duty, and the less the voting women would effect the average intelligence of the electorate.
I have shared this view and have not observed that women are denied any substantial property or civil rights because they can not vote. Indeed, laws in non-suffrage states are quite as liberal as laws in suffrage states."

Please ladies, if you are in a Super Tuesday State, please get out and effect the average intelligence of the electorate.

Your country needs you.
Posted by You can call me Betty, or Bethany, or Beth ...Just don't call me late for dinner. at 12:24 PM

I love the pillow! What a great idea - especially in an election year. I am in a super Tuesday state and would like to think that my vote will RAISE the average intelligence of the electorate! ;-)

A timely and excellent pillow and I just can't decide what is swankier, the lamp or your fix.

wonderful sentiments, all the way around.

I just love that pillow. The sign language drawing is so cute and fun, and the colors you chose are just lovely, so warm! I endlessly marvel at your creations... (You know, I can barely sew a button, and it takes me an hour, too).
I'm sure Benjy would love to curl up on your pillow - he loves a nice pillow - don't we all.

I'm deeply interested in the idea of modern samplers -- it's not just about doing the alphabet in an updated typeface, but about representing things about our own time and place; your sign language pillow is kind of staggeringly thoughtful and on target.... Um, wow. It was so entirely my pleasure to cast a vote for Hillary today!

Love it! We have compulsory voting in Australia, and are actually fined if we don't vote. Not sure why things aren't similar in the USA.

You drop the most interesting ideas and pictures on us as if they are just another tidbit of news...Your sign language pillows could/should be the hit of the century. How about some in your etsy shop?

I've days behind (again) on my blog reading, and was so happy to find this little gem of a post in my Bloglines. I love what you did to save that lampshade - brilliant, really - and the pillow is fabulous. What a lovely corner you've created. 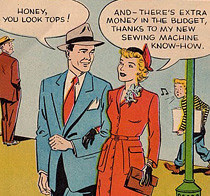 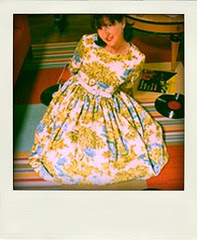